Sting may be a brooding intellectual and a rich, inaccessible sex symbol, but that doesn't mean he doesn't know how to have fun.

The popular British rock star balanced his serious side with his knack for catchy, even bouncy pop in an impressive show Wednesday night at Salem's L.B. Day Amphitheater. And though he wasn't able to hide his pain - either the emotional kind that runs like a dark river through his songs or the sore throat that caused him to cancel a scheduled Tuesday-night concert - he managed to turn it into happiness for a crowd of about 9,000.

Taking the stage after opening sets by Special Beat (a British band that includes former members of the ska bands the Specials and the English Beat) and Vinx, a solo percussionist and singer, Sting was as unassuming as a glamorous international star can be. Black T-shirt, black jeans, tall black jack boots - an outfit as lean and mean as the band that backed the crafty pop stylist.

Guitarist Dominic Miller, true to the spacious sonic spirit of Sting's old band, the Police, relied on subtle tonal shifts and odd timing, rather than gratuitious sprays of notes.

But the secret weapon was keyboardist David Sancious (if you think you know the name, pull out the first two Bruce Springsteen albums). Sancious' inventive embellishments provided abundant color and texture to Sting's compositions. And his blistering solo on 'When the World Is Running Down', a graceful torrent of pianistics that split the difference between the styles of Kenny Kirkland and Billy Preston, was the evening's highlight.

Sting himself showed some of the vocal strain that caused the cancellation of his first show at the Amphitheater, but only when he needed quick mobility or sustained tones in his high register. Otherwise, he performed well, relating easily to the crowd, leading it in sing-alongs, and generally keeping the proceedings light.

After opening with his recent hit 'All This Time' and 'Jeremiah Blues Part 1', Sting did get a bit morose. 'Mad About You', and 'Why should I Cry for You?' bracketed a cover of Bill Wither's, 'Ain't No Sunshine When She's Gone', which betrayed Sting's stiffness as a soul crooner but was an admirable choice, nonetheless. But the show's blue period was brief.

A series of Police tunes followed that kept the crowd on its feet. 'Roxanne' induced a shout-along response, and the nostalgia-mania continued with 'Bring On the Night', 'King of Pain', and 'Fortress Around Your Heart'.

By which point the show was off and running. A searing cover of Hendrix's 'Purple Haze' was among the highlights, as was a rousing 'Message in a Bottle', in which Special Beat star Ranking Roger joined on vocals.

(c) The Oregonian by Marty Hughley
Comments
0
You must be a logged-in member to add comments. Log In | Subscribe 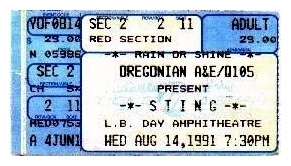