Due to an out-of-town assignment, I was unable to make Sting's concert at the Lakefront Arena Saturday, so instead I caught the singer's performance in Houston the night before. In that appearance, Sting gave a performance that was efficient, only slightly emotional, moderately energetic and heavily nostalgic.

The English pop star coaxed a big sound from a small band, a quartet. But the group's tightly professional set at the Summit didn't elicit enough emotion to warm the huge sports arena.

Sting is no jazz artist, despite his recent jazzy leanings. He made that clear by including six popular, reggae-tinged songs by his former group, the Police, in his 15-song show. But in subtle ways, he frequently gave small bites of jazz to his pop-hungry audience, and that's a good thing.

On the whole, Sting rocked, and his characteristic aloofness was rarely evident. The show's most emotional peaks, however, came with melancholy songs. 'Why Should I Cry For You', a song from Sting's most recent album that is half eulogy for his father and half rationalization for not loving him while he was alive, was poignant. In his versions of Bill Withers' 'Ain't No Sunshine' and the Police hit 'Walking On the Moon', Sting brought the mood to a calm lull.

Then, as if to prove that he can still rock out, he played a 'Purple Haze' that was as faithful to the Hendrix original as it was out of place.

Then, after a brief encore, he was gone.

(c) The Times-Picayune by Scott Aiges

For all the critical grousing about Sting's latest album, the (pick one) tortured poet, jazz wannabe, pop-star icon delivered a potent set showcasing that album in his first Houston concert in three years.

Playing before a packed Summit Friday night, the former Police man did not mess around. He's pared his band down from a bulky eight last time to three supporting players for this tour. And, aside from a colourfully stylish light show, Sting delivered a no-frills, no-nonsense concert of hummable hits and straight-ahead musicianship.

Although Sting is putting new emphasis on his bass playing these days, the best musician on stage by far was keyboardist David Sancious, who stole the show when given the chance with his inspired jazz-driven solos. Also stout in support were Dominic Miller on guitar and Vinnie Colauita on drums. Occasional backing came from ingratiating percussionist-singer Vinx, whom Sting introduced for a miniset of his own before the main event.

LA's three-piece Concrete Blonde opened the concert with 45 minutes of solid but sometimes ponderously downbeat material. The set was enlivened most by the hit Joey and a passionate 'Tomorrow, Wendy', an AIDS-directed song belted beautifully by singer Johnette Napolitano. Sting could hardly eschew his own familiar hits, but he also played almost his entire new 'Soul Cages' album, only one track of which (All This Time) is a single so far.

Dressed simply in black jeans and black T-shirt, Sting, 38, opened with four new songs: 'Jeremiah Blues (Part I)', 'Mad About You', the gently ebullient 'All This Time' and a softly soulful 'Why Should I Cry For You?', dedicated to his late dad.

He shrewdly launched a Police segment by taking requests and getting the inevitable call for 'Roxanne', whose intro brought the crowd to its feet. The song's powerful start and finish sandwiched a slow-tempo, reggae-styled call and response sing-along.

'When the World is Running Down' had a new jazz-bent urgency, thanks largely to one of Sancious's pounding solos. But 'King of Pain' and 'Fortress Around Your Heart' were mere workmanlike recreations of the recordings, and the new 'Wild Wild Sea' was too spare and subdued for an arena show.

After a lilting 'Walking on the Moon', 'Every Breath You Take' showed it hasn't lost its romantic durability. Sting again injected an energised finale, though not as hard-charging as on his last tour.

'Message in a Bottle' closed the set with vocal audience participation. The show's pacing didn't always click, but his devotion to unfettered musicianship was consistent, and his sex-symbol celebrity didn't get in the way. Sting wasn't here for star-tripping. He came to play.

(c) The Houston Chronicle by Bruce Westbrook
Comments
0
You must be a logged-in member to add comments. Log In | Subscribe 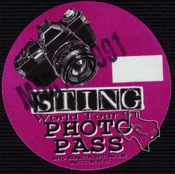 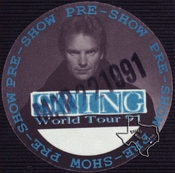 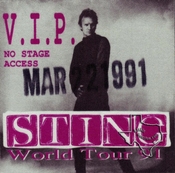