Sting and his Symphonicity conquer 12,000 people in the Canary Islands.

The British musician Gordon Mathew Tomas, better known as Sting and an ex member of the Police band, did not disappoint the more than 12,000 people that according to the organisers were in attendance in Gran Canaria Stadium to enjoy the concert that opened his Spanish tour.

Wearing a black jacket and trousers and a white shirt Sting appeared on stage round 10:00 pm with the Philarmonic Orchestra of Gran Canaria (OFGC) and his permanent band formed by the singer Jo Lawry, the contrabass player Ira Coleman, guitarist Dominic Miller and percussionist Rhani Krija.

Sting opened his first concert ever in the Canary Islands with 'Every Little Thing She Does Is Magic', but the audience went crazy with his second song 'Englishman in New York' with people singing and clapping along with the song.

After performing this classic, Sting addressed the audience at the concert saying that ''He was very happy to be in Las Palmas for the first time'' and took time to introduce the band and the OFGC, conducted for this concert by the american Chelsea Tipton.

After today's performance, Sting continues his Spanish Tour of 'Symphonicity 2011' which will take him to Granada and CataluÃ±a in the next days.

For two hours, with a twenty minutes break, Sting continued with his repertoire with other mythical songs like 'Roxanne', 'Russians', 'Next To You' and 'If I Ever Lose My Faith In You' among others, that received standing ovations from the audience.

The British singer showed that he's still in top form and that he has not lost his essence - despite being almost 60 years old - at his much anticipated concert in the Canary Islands.

After the break the audience did not stop singing and clapping other classics of the UK artist that have been adapted for the symphony orchestra including 'Shape of My Heart', 'This Cowboy Song' where he showed his guitar chops: and 'End of The Game' among other songs.

He finished the concert with 'Every Breath You Take' making people stand up from their seats, and singing along with this classic song. When the concert ended, the stadium was filled with the ''Pio Pio'' used to cheer the local football team, and the artist continued his recital, performing 'Desert Rose' and 'She's Too Good For Me', ending the show with 'Fragile' and 'Mad About You'.

For this concert, Sting (which means AguijÃ³n in Spanish) used a big theatrical stage with 90,000 watts of light and 180,000 of sound.

I'm an Englishman in Gran Canaria!

Sting performed his greatest hits with the Philarmonic and an enthusiastic audience who enjoyed a great concert sound. He mixed songs from the Police years with the most popular songs of his solo career.

At last the dream was realised. After 10:00 pm, a half hour later than the appointed time, Sting started the concert in Gran Canaria Stadium that ended two decades of waiting. The chords of the Police song 'Every Little Thing She Does Is Magic' made the audience remember that they were in front of one of the great legends of british pop rock, the writer of songs known by millions.

The public that filled the venue, enjoyed a very fine adjusted sound and different approaches to the songs, with all the exhuberance that a symphonic arrangement imposes on the pop repertoire, in this case given by the Gran Canaria Philarmonic Orchestra (OFGC). After this start came 'If I Ever Lose My Faith In You', one of his most celebrated songs in his solo career.

Of his solo discography was taken the third song of the night, who also allowed Sting to introduce himslef in Spanish. He explained that it was the first time that he had been in Las Palmas, and before he jumped into 'An Englishman in New York' he described himself as ''An englishman in Gran Canaria''.

Hits kept coming, the lilting 'Englishman' gave way to one of the magic moments of the night, the song that was the foundation of the Police style, the story of the prostitute called 'Roxanne'. A guitar accompaiment was enough to bring back the magic of the melody twenty four years later. Other songs followed, very well known melodies, like 'Russians' and 'Fields of Gold'.The night was already, definitely, Sting's. It was evident yesterday that the English musician has retained intact his overwhelming personality and charisma, the things that provided his initial fame and that he has accomplished musical perfection with the orchestral arrangements that surprised all the attendees at the concert. Whether accompanied with two musicians or by a 75 piece symphonic orchestra Sting displays the same passion and the same magnetism of the rock star that took the world of music by surprise three decades  ago.

With the support of 55 musicians of the Gran Canaria Philarmonic Orchestra (OFGC ) and his own band, the ex-Policeman captivated the audience with addictive songs, under the blanket of a symphonic instrumentation. The venue, similar to a open air theatre, allowed the concert to be listened to perfectly from any point in the stadium. Another element, worthy of mention, was the fact that the show was brokent into two sections of seventy minutes, with a twenty minute intermission.  allowing the development of the concert in a peaceful manner.

Sting came to Gran Canaria immersed in the most ambitious tour that a pop rock star can aspire to, the one that allows his songs to be dressed with a symphonic orchestration. 'Symphonicity' - a wordplay with the last Police album 'Synchronicity' -, was born as a recording project that later turned into a successful tour. The difficulty of a tour like this - the expense of travelling and operating with a whole orchestra - is resolved by playing with local symphonic orchestras after earlier rehearsals

July 26, 2011 posted by 1959lules
Las Palmas
Our first show in Spain this year. It was great. First row and people very happy because it was the first time Sting was in Canary Islands.

July 21, 2011 posted by 1959lules
Las Palmas
It was a great gig. I was in front row and the sound was perfect. People really was happy. It was the first time they could see Sting live. Whenever sounded so perfect Jo made me cry...
July 19, 2011 posted by stingcom
Photos
Lots of photos from the Gran Canaria show here!
Newer comments    1 - 4 of 4    Older comments 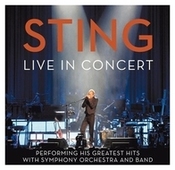