In Belgrade on Wednesday evening, British musician Sting was in fine voice as he performed orchestral interpretations of his greatest hits, accompanied by the Serbian orchestra ''Kamerata Serbica'', in front of more than 10,000 people.

Sting and ''Kamerata Serbika'', conducted by Sarah Hicks, played effectively for about two hours - with a break of 20 minutes - and the crowd cheered throughout as an inspired Sting performed songs from his time with The Police and from his solo career.

The show started at 20:20pm with the successful 'Every Little Thing She Does Is Magic', and Sting, who mentioned his earlier visit to Belgrade (2009) saying it had been too long ago, won the audience over with a flawless concert.

Although it has been said that all the songs are prearanžirane, on songs such as 'If I Ever Lose My Faith In You' and 'Englishman In New York', the orchestration was unobtrusive and did not substantially differ from the original versions.

Among the more radical interpretations was 'Roxanne', Sting's first major hit with The Police (1978), which started acoustically, in a much lower tonality compared to the studio version, and sounded both refined and delicate - in contrast to the original punk version.

The performance of 'Russians' from Sting's first solo album 'The Dream of the Blue Turtles' (1985) was a complete triumph and also memorable was 'Moon Over Bourbon Street' which Sting introduced as ''a song about a vampire'' with an arrangement of rich motifs that are invoked music from horror movies.

As expected the largest response was the huge Police hit 'Every Breath You Take' from 1983, which brought the audience to their feet and after that the first encore took the form of 'Let Your Soul Be Your Pilot', enriched with oriental melodies.

At the end of the concert, Sting took his acoustic guitar and performed 'Fragile' from his solo record 'Nothing Like The Sun' (1987), and then The Police song 'Message in a Bottle'.

Sting was very willing to communicate with the audience, with the funniest moment when he said in English: ''And now I will say something in Serbian'' and the sentence - which he repeated three times and sounded good - was: '' After the next song we will take a break of 20 minutes''.

Sting's tour of orchestral interpretations is called 'Symphonicity' with the name being a homage to the best-selling album of The Police - 'Synchronicity' (1983). 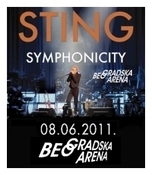