Sting's guitarist, Dominic Miller, recently noted that fans have grown up with their pop-rock hero.

He sure got that right. Check out that cello solo on 'Roxanne'.

But the orchestral 'Symphonicity' tour also suggests that, truth be told, the 58-year-old Sting might have helped his fans age gracefully as well.

Those who once might have filled the upper tier of the MGM Grand Garden may have been at Steel Panther, or some other arrested-development haven for '80s cruisers and boozers who feared they would become their parents if they opted for this upscale gathering. The tour (filmed a couple of weeks ago at Colorado's Red Rocks amphitheater) will doubtless be a PBS staple for years to come.

And it was kind of odd to see Steven Mercurio, conductor of the Royal Philharmonic Concert Orchestra, hopping around with more rock-star abandon than the rock star, who kept a cool reserve.

But no two tours are ever the same for Sting, who introduced the 40-piece ensemble as ''the biggest band I ever had.''

Loyal fans can only smile as Sting finds more ways to reinvent or deconstruct the classic hits than they ever thought possible. Friday's show was in the same MGM Grand Garden arena as the Police reunion of two years ago, and those at either concert still haven't heard 'Every Little Thing She Does Is Magic' with the rinky-tink piano that drove the original recording.

What the faithful have learned is to trust Sting's taste. Here, the leap of faith was that the orchestra was there for a reason, not just replacing keyboard textures with Summer Pops pomp.

There was a little of that, sure, in 'Fields of Gold' or 'A Thousand Years'. It was also easy to predict a few songs getting symphonic expansions, such as 'Russians' going full-on Prokofief.

But more of the tunes received ambitious rethinking, creating essential new versions. The timelier-than-ever vampire lament 'Moon Over Bourbon Street' was a full-on horror-flick soundtrack, complete with Sting taking a solo on the theremin, an electronic device that made creepy sci-fi sounds in the pre-synthesizer '50s.

'Tomorrow We'll See' got the muted-trumpet film noir treatment. 'Roxanne', with that cello solo, was the most romantically brooding version of the old chestnut yet.

And much of the three-hour show in two sets was devoted to giving a second hearing to rarities and deeper album cuts: an Aaron Copland take on 'The End of the Game', the cool jazz 'All Would Envy', the 'Cold Mountain' movie track 'You Will Be My Ain True Love'.

For an artist tottering less toward ''current'' and more toward ''classic,'' it was a good way to send fans back to their old CDs.

Sting may be running out of reasons to avoid writing new songs, and the orchestra tour might be a predictable means of mining the catalog one more time instead of getting back in the batter's box. But there's no denying he did it up right, taking the whole orchestra on the road instead of contracting in each city.

The result was an ensemble that was tight, like a band. They swung, too. 'Englishman in New York' and 'Straight to My Heart' had the feel of orchestral Gershwin and Ellington, if not the Nelson Riddle arrangements for Frank Sinatra.

Yes, Sting finally got the orchestra rocking and people out of their seats for 'King of Pain', and got his own body in gear for 'Desert Rose'. But if fans keep aging with him until he becomes their retirement version of Ol' Blue Eyes, rest assured he will wear it well. 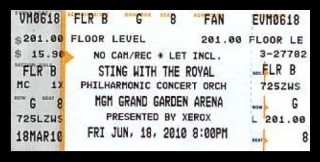