A poetic taunt has been hurled frequently at the milkman's son from Newcastle who qualifies as the New Wave era's most aspirational pop star. Oh Sting, where is thy depth? (The great critic Charles Shaar Murray seems to have originated the punsult, around the time the Police released the album 'Ghost in the Machine'.)

There's no doubt that Sting puts on airs in ways that rankle the sensibilities of many rock fans. His taste for smooth jazz and country estates, not to mention a songbook packed with detailed explorations of the creepiest corners of the egomaniacal male soul, blurs the line dividing exquisite songcraft, literary cleverness and self-indulgence.

Yet one must admit that few millionaire musicians look inward for profundity with the diligence and care that Gordon Sumner brings to the practice. The 58-year-old singer and songwriter always has challenged himself musically, revisiting his catalogue in new settings that make a case for the flexibility and wide appeal of his catalogue's greatest hits. And while his uplifting songs sometimes veer toward sentimentality, those character studies can be pretty devastating. Plumbing his own depths, Sting has made some genuinely enduring music.

Still on the path, the singer-songwriter has taken a classical turn of late (see ''Sting's classical effect''), working with London's Royal Philharmonic Concert Orchestra to rework material from throughout his career. He brought the 'Symphonicity' Tour to Southern California this week, performing at the Hollywood Bowl on Tuesday and at the Verizon Amphitheatre in Irvine on Wednesday. I headed down to catch his Bowl show and found just what I'd expected from this reliable innovator: expertly realized ideas, soothing sounds and the occasional real insight.

A traffic mishap prevented me from seeing the whole show; The Times will have a full review of the Irvine performance. But I can make a few observations after catching two-thirds of the set.

First, Sting's collaboration with conductor Stephen Mercurio should give pause to the many rockers lapping up the current trend for hooking up with a string section (or more). These efforts can be exciting but just as often come off as under-rehearsed and conceptually half-baked. Not so this show; an all-star cast of arrangers reworked the songs, and time clearly had been spent making sure the pop musicians and orchestral players onstage would work together to create a genuinely hybrid sound. Sometimes, the drums and percussion overtook everything. But I feel that's appropriate, since rhythm is a central element in Sting's songwriting, even when he's reeling out a ballad.

Second, not all symphonic music is classical music, and Sting need feel no shame in invoking other orchestral traditions. Many of this evening's most effective reinterpretations, such as the grand 'Fields of Gold' and the Kurt Weill-inspired 'Moon Over Bourbon Street', recalled really fine film music - a realm where pop and classical motifs have met for nearly a century.

'Desert Rose', with its Arabic flavour, had a big, blowsy arrangement that skirted the Bollywood sound. Another highlight was the faux-folk song 'You Will Be My Ain True Love', which Sting wrote for the film ''Cold Mountain'' and was originally performed with characteristic understatement by Alison Krauss. Rendered here as an eerie duet with background singer Jo Lawry, it sounded more like cutting-edge classical music than anything on the program - but was still very pop, using big strokes to create a haunting mood.

Third, dear Sting, your fans still want to dance. There's no doubt that the well-toned epicure appeals to the upper crust - this entire project began, after all, because a couple of super-rich Chicago Symphony donors persuaded Sting to play a concert with that ensemble, giving him the big-band bug. Many fine bottles of wine were undoubtedly sold at the Bowl, and most folks in attendance probably liked sitting for most of the concert. In the end, though, the aggressively rock-flavoured arrangement of 'King of Pain' had them bursting out of their seats. They stayed up, and even sang along, for 'Every Breath You Take'.

The impulse to travel in new directions is nearly always healthy for artists, and Sting is one of rock's greatest exemplars of staying fit by keeping on the move. Perhaps he didn't enjoy the Police reunion, and standing in front of all that lovely curved wood and catgut felt more appropriate now than leading ''just'' a band. Still, he really should remember that the rock idiom has a lot to offer - not least of which is its ability to fill his fans with joy. As he journeys onward in his pursuit of the deep, let's hope he doesn't forget the place he was (musically) born.

(c) The Los Angeles Times by Ann Powers
Comments
0
You must be a logged-in member to add comments. Log In | Subscribe 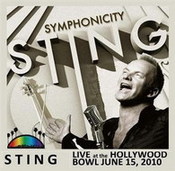