If the former Police frontman, who joined the sexagenarian club this month, has lost a step, it wasn’t evident Friday night at the Citi Wang Theatre.

More importantly it sounds terrific. If the singer-songwriter and former Police frontman, who joined the sexagenarian club this month, has lost a step, it wasn’t evident Friday night at the Citi Wang Theatre as he kicked off his 'Back to Bass' tour with an exquisite two-hour performance in support of his recently released box set, 'Sting: 25 Years.' (He returned Saturday night.)

A master of dynamics and extremely savvy casting agent of backing musicians, Sting and his airtight quintet played songs from almost every single pop album he’s released, from the Police’s 1978 debut to 2003’s 'Sacred Love'. (Oddly, 1987’s 'Nothing Like the Sun' was bypassed.)

The varied set list mixed a handful of Police classics - including a taut 'Demolition Man', and a solo encore of 'Message in a Bottle' - with some of Sting’s big solo hits - sultry takes on 'Fields of Gold' and 'Fortress Around Your Heart' - and a clutch of deeper, late career cuts that proved more than worthy of reexamination, including an incendiary version of 'Inside' that drew the sold-out crowd to its feet for its blistering, ranting climax.

Although he claimed to be nervous, the rocker appeared refreshed and was charming throughout the night, sharing anecdotes about the songs, paying tribute to his wife, quoting George Bernard Shaw, and generally appearing to enjoy the rediscovery and rearrangement of several songs. Little of the fussiness or pretension of which he is often accused was on display. Yes, he is exacting, frequently employing hand gestures to the band and sound engineer to achieve the desired mix, but it’s hard to argue with the sublime results.

If it were permissible to spend an entire review of a rock star rhapsodizing about said star’s drummer, this space would be devoted to the off-the-charts skills of veteran Vinnie Colaiuta, who transcended the concept of mere timekeeping on such songs as the odd-metered 'Seven Days' and 'Love Is Stronger Than Justice (The Munificent Seven)'.

The entire band was exemplary. From Aussie singer Jo Lawry’s shaded harmonies throughout the night and her impassioned solo vocalizing on 'The Hounds of Winter', to Peter Tickell’s electric fiddle flourishes, to the solos of lead guitarist Dominic Miller (Sting’s right hand for years) it was a tasty combination of lyrical and warped but economical. Miller’s son Rufus filled out both the guitar and vocal layers. And in a pleasant surprise, former Sting band member trumpeter Chris Botti popped up to burnish 'Seven Days' and 'Stolen Car (Take Me Dancing)'.

(c) The Boston Globe by Sarah Rodman
Comments
0
You must be a logged-in member to add comments. Log In | Subscribe 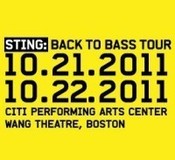 Oct 22, 2011
Sting opens Back to Bass Tour in Boston with exciting setlist...
Sting opened his Back to Bass Tour last night at a sold-out Wang Theatre at the Citi Performing Arts Center in Boston. The new band comprising of Dominic Miller, Rufus Miller (guitarist), Vinnie Colaiuta (drummer), Peter Tickell (electric fiddle), and Jo Lawry (vocalist) were joined by Chris Botti on two songs. The setlist, which comprised of 21 songs was an exciting mix of solo and Police tunes although heavily biased (16 post-Police songs) towards his solo career with a number of songs being aired for the first time in several years. The Sacred Love and Ten Summoner's Tales albums were particularly well represented with Stolen Car, Inside, Sacred Love and Never Coming Home from the former and Seven Days, Fields Of Gold, Heavy Cloud No Rain and Love Is Stronger Than Justice included in the set...
Read more
+

Oct 21, 2011
Sting talks about his Upbringing - new video interview...
Over the last month, through our series of webisode premieres, we've shared Sting's personal reflections on his enduring 25 year solo career. Today, AOL and Sting.com are excited to bring you previously unreleased interview footage highlighting the beginnings of Sting's musical journey, from his childhood memories of Newcastle to his first rock 'n' roll catharsis. To celebrate the release of Sting: The Best Of 25 Years, in stores watch Sting discuss his earliest inspirations...
Read more
+