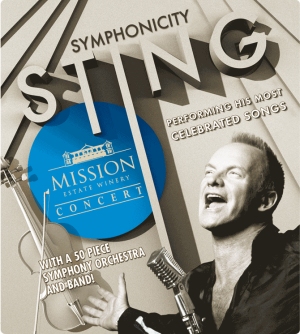 The Mission Estate Concert is very proud to announce Sting - accompanied by a 50 piece symphony orchestra and band - will extend his critically-acclaimed Symphonicity tour to take in New Zealand's biggest annual concert on Saturday, February 12, 2011.

Tickets on sale to Mission members from midday today. On sale to general public, 9am (local) Saturday, August 21. If you are not a concert member, become one now at www.missionconcert.co.nz.

The Mission Estate Concert is very proud to announce Sting - accompanied by a 50 piece symphony orchestra and band - will extend his critically-acclaimed Symphonicity tour to take in New Zealand's biggest annual concert on Saturday, February 12, 2011.

Selections, created especially for this tour, will include fan-favorites such as The Police hits 'Every Little Thing She Does Is Magic', 'Roxanne', 'Next To You' and 'Every Breath You Take', to notable songs from Sting's enduring solo career - 'Englishman in New York', 'Fragile', 'Russians', 'If I Ever Lose My Faith in You', 'Fields of Gold', and 'Desert Rose'.

Sting will also be joined by a group of accomplished musicians, comprised of Dominic Miller (Sting's longtime guitarist), Rhani Krija (Sting's longtime multi-genre percussionist), David Cossin (a multi-percussion specialist in new and experimental music and featured member of the Bang on a Can All-Stars), Jo Lawry (vocalist) and Ira Coleman (bassist).

The North American Symphonicity tour has taken the States by storm, with reviews capturing the spirit of the project and audience reaction thus far:

"...the real stars of the show were the arrangements: classical twists on classic hits that make Symphonicity a mustsee." - Globe and Mail

"...an all-star cast of arrangers reworked the songs, and time clearly had been spent making sure the pop musicians and orchestral players onstage would work together to create a genuinely hybrid sound." - Los Angeles Times

"Pairing Sting with the orchestra is brilliant synchronicity on multiple levels." - Denver Post

"This is one of the must see concerts of the year." - New York Post

"I am looking forward to performing in New Zealand, having a whole new palate of musical colors to work with and reinventing the songs that have been the staples of my live shows for over thirty years," says Sting.

To accompany Sting's world tour, Deutsche Grammophon recently released a companion CD, Symphonicities, to critical acclaim. Highlights include fan-favorites culled from The Police songbook such as 'Every Little Thing She Does Is Magic', 'Roxanne' and 'Next To You', as well as songs from Sting's enduring solo career including 'Englishman in New York',' 'I Burn for You', 'Why Should I Cry for You' and 'She's Too Good For Me', among many others. 'Symphonicities' is produced by Rob Mathes and Sting, and mixed by Elliot Scheiner (Steely Dan, Fleetwood Mac) and Claudius Mittendorfer (Interpol, Franz Ferdinand).

Sting's first venture into the classical realm began with the success of his #1 album 'Songs from the Labyrinth', a lute-based interpretation of the music of 16th century composer John Dowland, released in 2006 on Deutsche Grammophon. After completing the enormously successful Police reunion world tour, Sting returned to pursue his passion for combining musical genres with his most recent release 'If On A Winter's Night...' which debuted at #1 on Billboard's classical chart.

Prior to starting his solo career, Sting was the principal songwriter, lead singer and bassist of the rock music band The Police. As a solo musician and member of The Police, Sting has received 16 Grammy Awards, two Brits, a Golden Globe, an Emmy, three Oscar nominations, Billboard Magazine's Century Award, and MusiCares 2004 Person of the Year. He is also a member of both the Rock and Roll Hall of Fame and the Songwriters Hall of Fame.

The world tour is promoted by Live Nation and produced by RZO Entertainment, Inc. in association with Universal Music Classical Management & Productions and presented by Xerox. SEL is promoting the special event Mission Estate Winery Concert.

"We are thrilled to be a part of bringing this exciting and unique tour with Sting to the world," said Arthur Fogel (CEO/Chairman Live Nation Global Touring). "The arrangements, combined with Sting's brilliant songwriting and musicianship, will no doubt result in a magical evening of music."

Mission Estate's Chairman, Phil Hocquard says "After four decades as a world-beating superstar, Sting knows how to put on a show and Mission fans love nothing better than to belt out the classics. This is one definitely not to be missed."

SEL Director, James Erskine says "we are extremely privileged that Sting has agreed to include the concert in his World Tour. We are also very lucky to be able to offer Mission Concert fans his one and only North Island concert."

This exclusive concert will be staged at the Mission Estate on Saturday, February 12, 2011. Our loyal Mission Concert Club Members, will be able to EXCLUSIVELY secure tickets on line from midday today, August 19 and tickets are priced from only 0 plus booking fees and GST. For dining and Accommodation packages, visit The Mission Concert Club website www.missionconcert.co.nz. Plenty of accommodation is available.

"It speaks to [Sting's] remarkable imagination, to reinvent some of his biggest hits ...into breathtaking classical arrangements..." - Atlanta Journal Constitution

"[It's] all executed with such sterling craftsmanship." - People Magazine