Sony Music to Release ''FLOOD RELIEF - Artists for the Flood Appeal'' to raise money for flood victims across Australia... 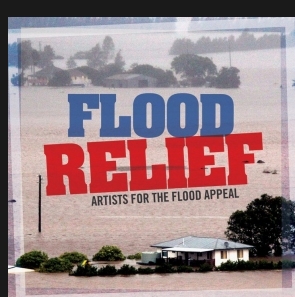 SYDNEY - 21st January 2011 - Sony Music Entertainment Australia is pleased to announce its support for the victims of recent floods across Australia through the release of a special benefit compilation CD "FLOOD RELIEF - Artists For The Flood Appeal".

Sony Music proceeds from the sale of the CD will go to the Salvation Army Flood Appeal through the charitable arm of the Australian Sony Group of Companies, The Sony Foundation to support young people affected by the tragic floods.

The floods in Queensland and throughout Australia have been devastating and affected the lives of so many people across the country. Sony Music Australia is once again proud to offer its support at a time of need through the release of this benefit CD - "FLOOD RELIEF - Artists For The Flood Appeal".

We have been overwhelmed by the response by both local and international artists wanting to contribute to the cause and our thanks go to all those artists and songwriters for generously donating their tracks royalty free. We also thank Sony DADC Australia for kindly donating the CD manufacturing.

The effect of this tragedy and its terrible toll on life, families, communities and property has touched many people both here and around the globe. On behalf of Sony Music and the Sony Foundation, our thoughts and prayers are with those affected, and our immense gratitude goes to all the emergency service people and volunteers who have so generously given in this time of need."

Sony Music's "Bushfire AID - Artists For the Bushfire Appeal" CD which was released in 2009 in response the Victorian Bushfires, raised over $1.7 million and sold over 110,000 copies which was donated through the Salvation Army's Victorian Bushfires Recover Response Youth & Music Project. This project assisted youth of the affected areas through establishing a network of youth support and music programs.

CD2
1. Kings Of Leon - Use Somebody
2. Crowded House - Something So Strong
3. Beyonce - Irreplaceable
4. John Mayer - Waiting On The World To Change
5. John Williamson & Shannon Noll - Island of Oceans
6. Go-Betweens - Streets Of Your Town
7. Bob Dylan - Shelter From The Storm
8. John Farnham - A Touch Of Paradise
9. Adam Brand - It's Gonna Be OK
10. Adam Harvey - That's What You Call A Friend
11. The Verve - Bitter Sweet Symphony
12. Delta Goodrem - In This Life
13. Pete Murray - You Pick Me Up
14. The Hollies - He Ain't Heavy, He's My Brother
15. Tom Petty - I Won't Back Down
16. Jessica Mauboy - Because
17. M People - Search For The Hero
18. The Screaming Jets - Helping hands
19. Melinda Schneider Featuring The Australian Girls Choir - Courageous
20. Mark Vincent - You Raise Me Up

Jan 22, 2011
For Adelaide singer, a Sting in the tale - Jo Lawry always loved Sting's songs, and now she sings them with him... reports The Advertiser...

For Adelaide singer, a Sting in the tale...